Innsbrook Resort | The Kids and Their Golf Course

The other day I was sitting down to lunch in our Clubhouse at Innsbrook when some golfers saw the Ranken Jordan logo on my shirt and asked about my affiliation with them. As always, I was only too happy to tell them about the junior golf program and all the great things that happen on a daily basis at that incredible facility. While we were talking I mentioned this blog and then thought, "I haven't written a post in quite some time." It was a very busy summer of golf, but the one thing in particular I want to share with you is the brand new outdoor field that was officially opened on August 23, 2018! 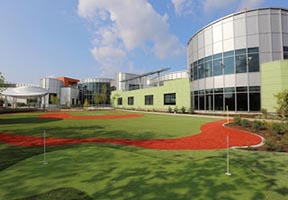 Over the past couple of years, any time someone walked into Ranken Jordan they saw (and will still see) a banner hanging above them proclaiming "More Healing and More Hope to More Children and More Families." This phrase was the central point of the 78,000 square foot expansion that opened in February 2018 and allowed them to grow from a 34 bed facility to 60 inpatient beds. When you walk through the expansion you'll see a rock climbing wall, a teen lounge, a therapy gym that I'd like to workout in, and so much more. You will also be able to walk out onto an observation deck overlooking what I like to refer to as "Ranken Jordan National Golf Links." 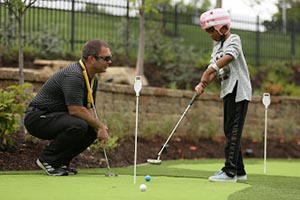 Going back to the summer of 2016, I remember the first time I saw the architect's renderings for the Ranken Jordan expansion. To say I was blown away would be a drastic understatement. Everywhere you looked was something cooler than what you saw a few seconds earlier! Then, I was shown the outdoor field … and not one, but two, putting greens! As amazed as I always am every time I walk into Ranken Jordan, I could not help but thinking, "wait a second, as cool as this place already is, now they are going to have a rock climbing wall, gym, baseball field, AND two putting greens?!" Watching the progress every week was something that led to tremendous anticipation for what would happen in August of this year. 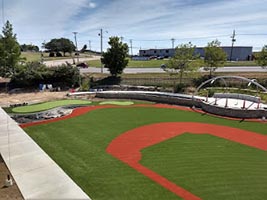 The day the field officially opened was beyond description. We had two ceremonial first pitches and then it was time for Ayden to officially open Ranken Jordan National Golf Links! Leading up to the grand opening, Ayden had been a regular junior golfer and looked forward to Golfday every week. He hit golf balls, worked on his putting, and he healed. We watched not only his golf game improve, but more importantly, his health improved. When I walked him out to the First Tee, he took his stance and ripped a drive straight toward the putting greens! He then took his putter, stepped onto the green, and made his putt (Ok, so he hit two putts and the video linked HERE didn't show the one he made)!  Ayden then turned and waved to the crowd just as he would after making a birdie putt on the PGA Tour! While watching him, I knew immediately why I refused each invitation to try out the putting greens before they were officially open for the kids. 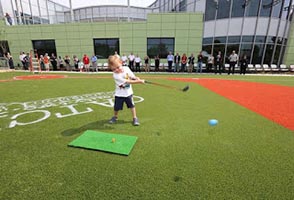 Almost eight years ago I walked into Ranken Jordan Pediatric Bridge Hospital for the first time. During that time span, with very few exceptions, I am there at least one day every week. I can honestly say that I am as amazed and impressed with every aspect of the facility as I was that very first day. However the opening of the outdoor field and all that it allows the children to do has me in awe. How many other pediatric facilities can you visit and see a child who, due to a horribly tragic accident is now a quadriplegic, and part of his therapy includes him playing golf outside while he's in the hospital? My favorite part of helping him was the first time I saw the big smile on his face and the promise he made that he would give me a putting lesson! For any of you who are in or near St. Louis, or if those of you from out of town would ever be in St. Louis, I encourage and invite you to visit Ranken Jordan see the miracles that happen there every day. I can promise you this, your life will be better after any amount of time you spend at 11365 Dorsett Road. 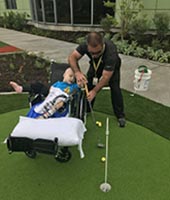 Commenting is not available in this channel entry.